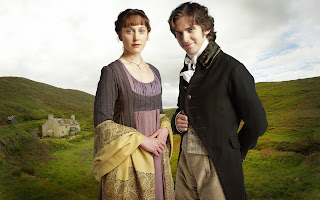 Is love a fancy, or a feeling, or a Ferrars?

Unfortunately I missed marking the bicentennial of Jane Austen's first published novel back in 2011. I believe that Sense and Sensibility was my first experience of that lady's fictional prowess in written form. I had seen Pride and Prejudice at the tender age of eight or nine, and the 1995 adaptation of Sense and Sensibility not long after. Trying valiantly to hold back tears, (as I didn't like to cry during stories) I asked "Marianne doesn't--die, does she?" 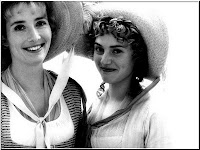 I won't reveal the answer, for the sake of those who don't yet know the story. ;) But after watching the movie, I read the book. And this year I am racing against time to complete all seven of her novels before the summer slips away. I'll let you know the end result.

Jane Austen has been slandered as a great feministic propagandist of the 19th century; however I find it ironic that her novels contain little more than the stories of young ladies living at home until they are married. Lizzy Bennet, Eleanor Dashwood, and Catherine Moreland aren't much interested in changing the world or championing women's rights. All they want is a happy family, a good husband, and enough money to make a living. What is often seen as Austen's feministic "career" is ridiculous; women can write books, and writing is a biblical and perfectly feminine occupation. And her women's rights advocates disguised as stifled daughters longing for freedom? Sorry. I can't find any indication of that being the case. These young ladies know their life business, and each story focuses on their longing to be a woman, not on a wish to e like a man.

Eleanor, Marianne, and Margaret Dashwood have just suffered the loss of thier father. Due to the nature of the estate's entail, it passes to their older half-brother instead of to them. When he breaks his promise to their late father about offering them pecuniary assistance, they face living expenses with a much smaller income than that to which they have been accustomed. And of course, which such a small income, it is unlikely that the three sisters will ever be able to marry advantageously. Eleanor, has alread formed an attachment with a certain Edward Ferrars, the brother of her sister-in-law. She even has reason to suspect that he returns her attachment. But his mother has other plans for him. 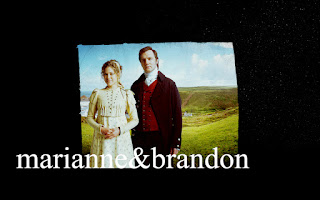 So the Dashwood ladies move to Devonshire, to a little cottage, far away from their former home and former friends. Eleanor, sensible in the matters of the head and the heart; Marianne, lover of poetry, scorner of conventions, and wearing her heart on her sleeve. Margaret is a bit young to be thinking of such things, but their mother definitely sides in personality with Marianne. Their new neighbors the Middletons are rich and vulgar, though they are cousins. Colonel Brandon is visiting Sir John Middleton; he loves Marianne very soon after they become acquainted, and he wouldn't be half bad if he wasn't on the wrong side of five and thirty. (Austen's words, fellow bibliophiles, not mine.) Of course she doesn't return his affection; she's seventeen years old and despairs of ever finding her ideal mate. Life bids fair to settle into monotony until Marianne falls in love with a Mr. Willoughby. Oh, its romantic. Falling down a hill and spraining her ankle, rendering a ride in his arms indispensable. Everyone knows Willoughby as a charming young man, and life stretches before them full of rainbow promise. Then the Dashwood world crumbles. Willoughby leaves the neighborhood with no plans to return. Eleanor finds out that Edward has had a long-standing engagement with another young woman, who makes her promise to keep it a secret. Alternating between wit and pathos, Jane Austen paints a life-like picture of two sisters' response to disappointment--and what comes of it. 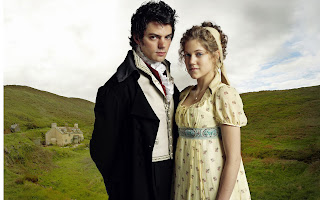 My Thoughts
I've always had a certain connection to Sense and Sensibility. Suffice it to say, I've taken the Jane Austen Character Quiz twice, and each time I come up as most like Eleanor Dashwood. I would have to agree with the results, though of course I'm not a carbon copy.
There's a bit of profanity here and there.
It's been a few years since I've read Austen's works, except for Northanger Abbey, which is almost an annual favorite. I had forgotten her writing syntax, and found it quite interesting. Austen relies on narration to carry her story rather than conversation. Oftentimes a whole chapter will pass with a lot of important events accomplished, but scarcely a word between one character and another. This is good writing, and a skill every author should practice, because modern plots are often carried out solely with conversation instead.
Well-written, and a worth-while story on how to view life: with Sense or Sensibility.

Just write using the address on the sidebar, and I would be thrilled to share. Be sure to put the year of the adaptation in your request. :)

If it's been a while, rediscover Austen this summer with her classic about two sisters exploring the meaning of love.

Posted by Lady Bibliophile at 10:29 AM