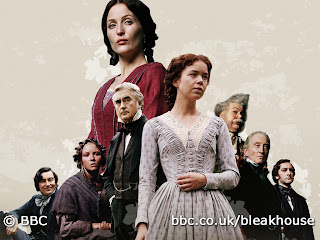 ﻿
I've continued to celebrate Dickens' bicentennial all year long. :) It's been a good year, fellow bibliophiles--in the book realm at least. Having just finished all 900+ pages of Bleak House, I thought you all might enjoy a review. Let me not hear any muffled mutterings, for Bleak House, whatever it's name, is the least bleak element of the story.

And it was fearsome fun.

The Story
The Court of Chancery has dragged it's feet over the years until the Jardyce and Jarndyce case has become a laughingstock in London society. Ever since the old gentleman who wrote two wills has left his headaches to his kinsfolk, the question of who gets the money has wreaked merry havoc amongst his surviving descendants. Maybe not merry, come to think of it. There's been more than one suicide over the whole affair. We join in the hunt when elderly John Jarndyce, who will have nothing to do with the case, takes in two of his younger cousins, both wards of the court. Ada Clare and Richard Carstone, both orphans, are in need of a loving home, and being a loving fellow himself, he delights to take them in. For Ada's comfort, he employs a young woman as a companion, namely Esther Summerson, who's mysterious past has not prevented him from providing for her ever since her aunt died. It is from Esther's perspective that we hear his half of the story, and a dear sweet narrator she is, too--always doing her duty to make others happy. These congenial companions make their home at Bleak House, which doesn't live up to it's name, and settle into a steady life as they await Richard and Ada's coming of age. With visits from the childish Harold Skimpole, who is too innocent to be bothered about money, to the bluff old Boythorn, both friends of Jarndyce's, the first part of their existence is a very happy one indeed.

Lady Dedlock is bored to death--bored to death with her house, her husband, and her society. Not bored enough to do anything shocking, mind you, but wishing that life would not be so utterly insipid as to force itself upon her notice. She's another suitor in the Jarndyce case, but an indifferent one, as she's well enough off not to need it. Her husband Sir Leicester Dedlock dotes upon her with all the courtly grace of the aristocracy. He's much older than her, but that's beside the point. Suddenly her life takes a turn that is not so boring after all. The ruthless family lawyer, Tulkinghorn, brings in a piece of paper that causes her to faint upon seeing the writing. He sets up a cat-like watch upon her, absolutely determined to find out what would cause her to be disturbed. Upon the death of a mysterious copyist, a little London sweeper named Jo leads Lady Dedlock in disguise to the place where the copyist is buried. Tulkinghorn finds out, and picks up the trail.

It's time for Richard Carstone to choose a profession, but he's rather indifferent to any of them, as he hopes to come out well in Jarndyce and Jarndyce, and be set up for life with an inheritance. For love of Ada and a desire to procure a means for them to marry, he takes up medicine, law, and the army, each failing one by one. John Jarndyce refuses to allow the engagement to continue, and Richard immediately breaks off the relationship with the kind old gentleman. A friend of Jarndyce's, a young Doctor Woodcourt, visits them often while they are in London, and someone begins to fall in love with him--don't worry, you'll know who. ;) Jarndyce proposes to Esther, who upon consideration, resolves to do her duty and love him as he has been so generous to her.

Esther falls ill with smallpox from coming in contact with the street boy Jo, and loses her beauty completely. Woodcourt returns a hero from abroad, though none the richer, only to find his lady-love engaged to someone else. Tulkinghorn discovers Lady Dedlock's secret and tells her he will expose her to Sir Leicester and she will be publicly shamed throughout London. Richard persists in staking his whole life on the Chancery suit, gradually falling into debt and decline.

Caught between all of this, Esther's loving heart is forced to watch as those around her make irreversible decisions that will affect everyone around them. Determined to bear her lot cheerfully, and love and serve those around her, she endeavors to be a shining beacon of hope to Richard and Ada, her guardian, and even Lady Dedlock, in order to prevent them from ruining their lives completely.

But the cruel claws of despair and pride have their hold. Will it be too late to extricate them?

And will Esther and Jarndyce find the path to happiness?

I have not yet seen the 2004 adaptation of Bleak House; I will let my readers know when it is available for review. I have decided to include the trailer, as it is quite an intriguing introduction to the book itself, but I cannot recommend the movie one way or the other. Note that there is a brief view of Tulkinghorn and the deceased copyist at 0:28.


For more information regarding the movie, check out the official website here.﻿

Oh, yes. This is Dickens.

Hilarious caricatures of legalistic missions-work, heart-stopping drives through fog enshrouded London, constant fighting between life and death, never-ending tension. A must-read for any Dickens fan. I would recommend that you read Great Expectations and Little Dorrit before trying Bleak House, as it's some of his heavier stuff, but if you enjoy the former, then you'll love to continue on to his tirade on the Court of Chancery. It's bittersweet and definitely satisfactory.

Dickens contains a little language here and there, which I use correction tape on.

Esther is the best heroine I have ever found that does her duty without dragging the reader through despair while doing it. She does it humbly and cheerfully, and Dickens pulls off her first-person narrative with brilliant mastery. Esther alone makes it worth the read. John Jarndyce also deserves a round of applause for his fatherly love and Christian nobility. With his Growlerys and his gentle persuasion and his sacrificial guardianship of all three young people, he wins the hearts of all who read about him. My favorite secondary character was definitely the detective Bucket. I know I'm not supposed to like police-inspectors who ferret out everybody's past, but there you have it, and it can't be helped. I think he was of the race that knows Joseph, and I could feel his spirit of comradeship.

I appreciate how much life Dickens breathes into each of his characters. Every one of them has a different personality and a different plot, and you couldn't do without them. From the slimy little Guppy to the dutiful Prince Turveydrop to the delightfully disciplined Bagnet family. Honestly, I love them all so much that it hurts to leave any out, and there are a lot more I wish I could have included.

Dickens also threw in a couple of moral dilemmas that were biblically handled, much better than I've seen in other literature. (Orczy's Lord Tony's Wife was one of them. *shudder* Badly done indeed.) Esther often receives secret confidences, and gives out such wise and helpful advice that I was refreshed. Take the case of Caddy Jellyby wanting to keep her engagement secret. Bravo, Esther.

Those who listened to me discuss Bleak House while I read it might have a different impression than I meant to give. After long reading sessions, I would come out and say  "Lost another one today" or sometimes two or three, as the case might be, with my little twisty drama grin on. Needless to say, you won't end with everyone you started with.

With Dickens, there are no guarantees.

Bleak House wins a hands-down Lady Bibliophile approval, and I recommend that you read it for yourself to celebrate his 200th anniversary.