When Bibliophiles Play (Part One) 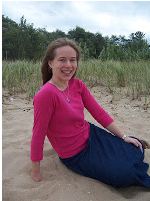 You all are such nice readers to vote for this topic. :) Do you know, I haven't played in a very long time. For scraps of time here and there, whenever I can get them, but not since that long glorious week at the cottage in September have I abandoned all my duties and read and slept and relaxed with abandon. Sundays are strictly a day of rest, with a little correspondence thrown in for good measure,  but a real set-apart rest for a lengthy block of time is like a distant memory and a long-cherished dream for the future. I'm going to take that rest in another week or so, but until then we'll be posting this series on "When Bibliophiles Play", with all the little bits of trivia and behind-the-scenes things that some of you love to know about online personalities.

I had to laugh. Because I almost didn't put this one on the list. At the last minute I decided to, but I thought "This will be embarrassing. It probably won't get any votes." You certainly pulled a surprise on me.

And please do mention in the comments what you would especially enjoy hearing. :) This will be a three part series, and I expect to have lots of fun with it. Today's will be general in nature and subject, but I expect to get more specific in next week's post.

So, when I'm not reading I generally:

1. Listen to Music
When I'm not reading, I listen to music. Wherever I go, whatever I write, I generally have music playing the background preferably music with vocals and not too dreamy in nature. Occasionally I'll listen to a dreamy song when I need to set a certain mood, but I'm generally always running deadlines, and peppy music helps. I use YouTube most often, and over time I've created 12 playlists which I rotate according to mood and needs. Everything from Celtic to Writing Playlist, to Hobbit 1 and Hobbit 2. :) I also have a CCM Playlist, with the pitiful and forlorn pickings of CCM songs I actually like, and a certain love playlist that sets me in the mood for writing about one of my literary characters and his lady-friend. Well, it will when I actually get to writing about them. It doesn't actually have any love songs on it: it has Christmas songs. Weird. I'm probably one of the only people on the planet who still listens to Christmas music in May, to inspire romance. I also listen to music clips that throws me into fits of laughter just because of the way the performer does it, which isn't nice at all, at all.

You might find me on YouTube, if you were to recognize my picture next to my profile. But I have one peculiarity which I haven't mentioned thus far. I locked all my playlists except for one. You see, there are certain precious things that are not always for everyone to see, and the majority of my music is one of those things. I've wept and laughed and fumed and written and re-written to them, and all those memories are tucked away. Plus I tend to be over-cautious on what I recommend. So over-cautions that I sometimes use Latin usernames to hide. Yeah, that's bad I know...

But my public list is a playlist of the Piano Guys, which you can find here. And just for fun--and just for you--I've created a public list with ten songs that I rotate through pretty often so you can get a little taste of what I use in lieu of coffee. Barring the Celtic playlist, which is actually what I listen to most often. :)

Now, when I'm not working on the computer I like a different kind of music entirely. Quiet music is on the queue then, with Jane Austen soundtracks, orchestra pieces, and classical of all kind. When I'm getting dinner ready (and happen to want music to accompany me) I would much prefer Joshua Bell or Samuel Sims as companions.

And this isn't music, I know, but I love Focus on the Family Radio Theatre. Not Adventures In Odyssey. Things like Amazing Grace and Father Gilbert and The Luke Reports.

Favorite Song:
Probably Nella Fantasia.The others come and go, but Nella Fantasia remains as one of the most relaxing and dreamy pieces I love to listen to. Paul Byrom, the Irish tenor, has the best rendition of it. (I don't recommend all his other pieces, though.)

Also Vivaldi's Four Seasons and Beethoven's 9th Symphony. I had the pleasure of hearing Beethoven's 9th in live concert once, and I sat in frozen rapture during the entire thing. (Which Junior B. found incomprehensible.)

Actually, I don't listen to a lot of classical on CD. That's another one of my peculiarities. I much prefer it in live concert to listening through the headphones.

2. Organizing
When the books are all on the shelf, I also organize. I consider this a pleasurable thing, and if I had an obsessive compulsive disorder, this would probably be it. Even when I'm not organizing, or not able to organize a particular area, I sit and put it to rights in my mind. "If in doubt, throw it away" is my motto, but I'm not reckless about it when I'm sorting through other people's things.

For instance, my beloved ASUS computer has everything in a folder. Everything. Only I am able to navigate the labyrinthine tunnels of folders and sub-folders that I've tucked all my files away in. Woe to the document I can't find a place for: it's either put into an isolation folder or speedily gotten rid of. I go through my corner of the bedroom once every other week and put everything back in its place. And the lovely storage under my bed is divided into three rows of boxes and items, arranged according to how often I use them.

The only place that I'm not organized in is my purse. That's a cavernous mess of papers and flash-drives and lip gloss and business cards. Also old coupons. And more papers. I didn't shop for my own purse until I was seventeen years old, and grumbled that I might as well buy a carry-on suitcase and be done with it.

But aside from that I'm an obsessive-compulsive organizer. If we lived together and you happened to be a packrat, we would both have to exercise some Love and Grace.

3. Collecting
Some collect stamps, some collect pink china pigs (according to the books I've read), some collect shoes. I collect computer wallpapers. Little Dorrit, LOTR, Jane Austen, North and South and The Hobbit primarily, though I pick up anything period drama-ish that strikes my fancy. If you would like to avoid all the yucky FanPop advertisements and get them straight from my email, I would love to send them to you. :) Address is on the sidebar, and I have them all packaged up to go from any of the above categories.
I also collect bookmarks. Every symphony ticket or little bit of decorated pasteboard that I like and take a fancy to, I keep in my pencil case along with my writing materials. Not only do I collect them, I also match them to the book I'm reading, according to the theme of the book and the bookmark. Coordination is the joy of my existence wherever I am able. But I forget: this is supposed to be a break from reading. :)

I dislike all sports except men's tennis. I may not get to see tennis matches very often, but when I see one on I always drop my book and watch in rapt attention. There is something about tennis which provides both drama and pizazz to the concept of competition, which I find most enjoyable. In this instance I depart from my Scottish roots. Roger Federer is the one and only person I cheer for. And when I watch him, I cheer with gusto. There is nothing so disappointing as seeing Andy Murray beat him out. ;)

5. Domestic Arts
Like all girls, I enjoy crafting. And cooking. And baking. Though I 've never gotten the hang of scrap booking, and don't have quite the like of paper crafts that I used to, I enjoy crocheting, and once upon a time cranked out the knitted socks with gusto. You name the Klutz book, I've probably done it. Recently I've turned to making jewelry, and during my early teens I had quite the affinity for miniature designing, including wiring my entire dollhouse with electricity and knitting sweaters and baby booties in scale on 000 knitting needles. In the past I've also sewn Colonial costumes in company with my mom, and a good many of my own clothes.
Also, I'm the resident sourdough cook and yogurt maker. Sourdough breads, rolls, cookies etc, from the GNOWFGLINS e-course. The fruits of those labors produce results like this: 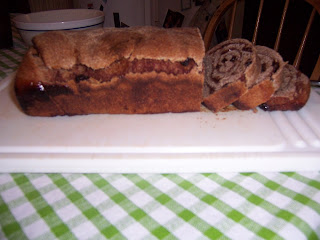 Come over, and I'll make you a piece. ;) I haven't tackled yeast bread by hand yet; my first attempt ended up about 3 inches high, and I've never done it since. But someday...

Right now my sister and I are cooking our way through the continents, two meals per continent. We've made Indian and Mediterranean. (Mediterranean happens to be my favorite cuisine. I could eat carrots for breakfast as long as I had hummus to go with them.) And we just finished a Scottish meal. Junior B. wants do to Norwegian to celebrate Mikkel's homeland, but we're trying to escape the fish. Which...doesn't leave us much.

6. Exercise
Every Monday Wednesday and Friday I do the elliptical bike and resistance bands to keep fit. Gauged by sweat. If I'm not soaked I turn up the tension until it's good enough, which means I really can't listen to anything soft and quiet while I'm pedaling. I have about ten tracks with enough rhythm while I exercise, so needless to say I've memorized those quite well.

7. Speaking and Ministry
Every other week we hold a Bright Lights meeting in our home, which I lead. I also attend my brother's Bible studies every week, which you can check out here. Today I'm speaking at the INCH convention in MI, and I would love to meet you there. :)

So these are a few of the things I do when I'm not reading. On Tuesday I want to do "A Day in the Life" and post some pictures of my writing nook...and my manuscript in progress... and more...

But I would love to post what you want to hear as well. :) Have a splendid weekend!

Posted by Lady Bibliophile at 7:17 AM