Housekeeping Note: Be sure to check out the new gadget on the sidebar: A Jane Austen quiz developed by Suzannah Rowntree from In Which I Read Vintage Novels. If you dare to take it, you'll discover which Jane Austen character you REALLY are. :) It's great fun!


One of my beloved bookshops to visit is a log-cabin style place in the northern part of my state. Most of it is full of New Age stuff, but once you go past that, up a crooked step into the dim-lit back room, you'll find a host of treasures; including a set of Waverley novels that I've drooled over for the last three years. A lot of things are over-priced, some are real gems, worth fetching a higher price tag. Autographed Sam Campbell books. First editions of Chaim Potok's The Chosen and Augusta Evan's St. Elmo (both of which were sadly beyond my budget) and numerous Laura Lee Hope children's books.

The first year I found Scott's Lady of the Lake there. Alas, last year the Dickens book I so longed for was gone, and I am not its happy possessor. But one year I found Cranford, and I spent my hoarded vacation money most happily for this classic amongst Elizabeth Gaskell's works.

It's in awful shape, and in my book-loving heart I probably paid too much for it. But happiness has no price, and this weekend I finally pulled it out to enjoy it again. I loved every moment with the Cranford ladies, and today I would like to share a review of this book with all of you. 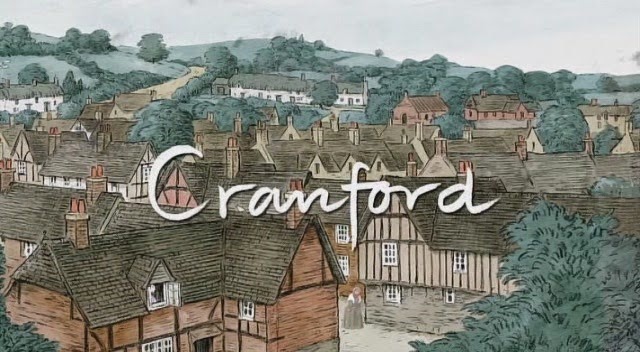 In the first place, Cranford is in possession of the Amazons; all the holders of houses above a certain rent are women....For keeping the trim gardens full of choice flowers without a weed to speck them; for frightening away little boys who look wistfully at the said flowers through the railings; for rushing out at the geese that occasionally venture into the gardens if the gates are left open; for deciding all questions of literature and politics without troubling themselves with unnecessary reasons or arguments; for obtaining clear and correct knowledge of everybody's affairs in the parish; for keeping their neat maid-servants in admirable order; for kindness (somewhat dictatorial) to the poor, and real tender good offices to each other whenever they are in distress, the ladies of Cranford are quite sufficient. ~Cranford, Chapter One

And self-sufficient the Cranford ladies really are; incoming railways to bank failures, hilarious robbery scares to the knotty question of how to address Lady Glenmire when she comes to town, in every dire need these ladies are the pattern of gentility and small-town sisterhood. From the strict Miss Jenkyns to her soft-hearted sister Miss Matty, from the practical Miss Pole to the lethargic Mrs. Jamieson, these ladies and their way of dealing with what life throws at them are sure to delight and entertain.

If you're looking for what to read next, I suggest curling up with Cranford. It's a Gaskell classic that you won't want to miss. 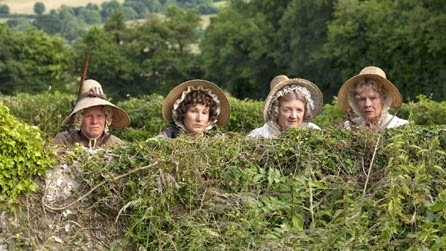 My Thoughts
What can I say? Full of charm, rambling in and out, and encompassing the large and small of Cranford's life, this book is charming and poignant and relaxing all at the same time. It won't take you to giddying heights of epicness--it's like a soothing cup of tea and a cozy fleece blanket that you can curl up with. And books like that are good to have in anyone's library. If you have an e-reader, you can pick it up for free on Amazon.

Mary Smith (who, I might add, you don't know the name of until almost the end of the book), makes a most charming first-person narrator. She's younger than most of the Cranford ladies, and doesn't speak much of herself, but the respect and love for her elders that breathe through every line make her, too, a good companion--she reminds me a good deal of Esther from Bleak House, in her self-deprecation which serves to heighten, rather than hide, her true worth.

Language is minimal, and almost nonexistent--only a couple of instances at best. This is a clean story, and I can't think of any themes to be aware of before reading. The most graphic elements are old ladies telling stories about how to get lace out of pussy's insides, and flannel drawers for hairless cows. :)

A lot of Gaskell's works were written as serials for magazines, and though I don't know for sure on this one, I rather suspect it was as well. Having experience with once-a-week chapter deadlines myself, I can recognize information cramming when I see it, and a couple of her plots are rather hurriedly concluded at the end. But in Gaskell's instance, she can blessedly get away with it. Cranford, its culture, and its people are above and beyond the normal rules of literature, and can meander along its way or rush forward red-faced and out of breath while still maintaining its dignity. :)

I must say, I think our culture could use some Miss Poles and Misses Jenkyns and Mrs. Fitz Adams today. They may have their faults, and little scrimping habits, and tendency for gossip--but they're the most civil, loyal friends you could ask for, and they have the happy knack of being able to instruct young people in the rules of polite society while still being charming about it.

The dear ladies of Cranford have enchanted thousands of viewers on BBC's movie adaptation. As a note, BBC chose to combine several of Gaskell's books in the film, so it's not strictly confined to Cranford's tale; you may find elements in the film that are missing in the book, and if so that would be why.Though I've never seen the movie myself, I hear that it is excellently done, and look forward to watching it sometime.  But today, if you've never actually read the book Cranford, I do entreat you to check it out. The original story behind the movie is such a treat, and a fast, delightful, easy read. The small town charm and delicate characterizations make for a pleasurable weekend's reading--even if poor Miss Matty does think Richard III murdered the two little princes in the tower.