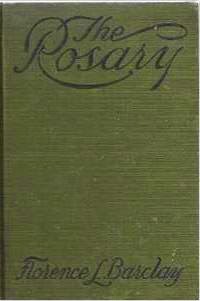 Back with another book review today, folks!

When I first picked up Florence Barclay's novel The Rosary from the library, everyone who saw me reading it asked if it was Catholic. :) A legitimate question, and one I've addressed in a past article. But no, not this time. The characters are Protestants (or Episcopalian. Which is slightly different.) And the Rosary refers to an old song one of the characters sings.

But we're getting ahead of ourselves. That's part of the plot.

The Book
Jane Champion and Garth Dalmain meet up pretty often in their various social circles, and they're quite good friends. Jane is friends with most of the young men who make the rounds of the big estates; she's a sensible woman who turns a deaf eye to their more innocent scrapes, and offers them wise counsel and warm friendship. Considered as "one of the fellows", she never thinks of Dal as anything out of the ordinary until The Rosary.

Jane's aunt likes to hold musical events to showcase local talent, ending the evening up with a professional performer so she can snicker about the vast difference in ability afterwards. Jane doesn't particularly like these evenings, but her aunt means no real harm, and when the great singer Madame Velma calls in sick, Jane volunteers for her aunt's sake to sing the song Velma planned to enchant the audience with: The Rosary. And enchant them Jane does.

The hours I spent with thee, dear heart,
Are as a string of pearls to me;
I count them over, ev'ry one apart,
My rosary; my rosary.

Each hour a pearl, each pearl a prayer,
To still a heart in absence wrung;
I tell each bead unto the end, and there--
A cross is hung!


After Jane sings the song, an even warmer friendship springs up between her and Garth, and it isn't long before Garth proposes to her. He tells her she is his wife, as sacred as if they were married, and they are designed for each other. Jane loves him; but thinking that her practical personality and plain face is completely opposite from the pretty woman Garth should have, she tells him she cannot marry a mere boy and sends him a way.

Three years later Jane deeply regrets her decision, and sees Garth's love for her in a new light. But after changing her mind, and determining to write to him to see if he will take her back, she hears that Garth is permanently blind from a hunting accident and her simple resolution becomes a deal more complicated.

Jane confides in her friend Sir Dereck Brand, a nerve specialist, and he tells her that as a man, Garth will never accept her back crippled when he couldn't satisfy her whole. So with Sir Dereck's help, Jane crafts a plan to win back Garth's respect, and both she and Garth learn to kiss the cross at the end of their rosaries.

My Thoughts
The characters in this book are particularly well-drawn. Instead of being like Jane Eyre and St. Elmo, in which you have one mostly good woman and one mostly bad man, the Rosary contains two people who are sanctified and mature in their Christian walk--yet who both made mistakes. While Jane Eyre takes the top position among the three, The Rosary is even better written then St. Elmo, and a little more realistic as far as characterization goes.

One element I loved about this book was the friendships between men and women. Friendships with the opposite gender can lead to great dominion conversation and iron sharpening iron, and Jane and Garth, as well as Jane and Derick, constantly illustrate that. Jane and Garth discuss marriage partners for him at the beginning of the book with all the common-sense innocence of brother and sister, and Jane trusts the happily married Dereck with very personal problems that she needs a man's help to fix. In both cases, they keep appropriate boundaries and treat each other with chivalry and respect.

Jane thinks Garth uses profanity once, and says "Hush, I never like to hear that name spoken lightly, Dal." Garth replies, "Spoken lightly! No speaking lightly would be possible for me tonight. 'Every good and perfect gift is from above.' When words fail me to speak of the gift, can you wonder if I apostrophize the Giver?" While that sentiment is all very fine, and quite nice and poetic, I couldn't help but think that Garth didn't always apostrophize the Giver as reverently as he did then, and there were quite a few uses of God's name that didn't seem to be meant as prayers. But I don't know; he's a Christian laddie, and I'm willing to give him the benefit of the doubt, but I would have appreciated if Florence Barclay could have clarified what Garth meant by his constant use of the Lord's name.

I picked up this book several years ago (yes, around the same time as High Fences; go figure.) and got stuck at the beginning. Determining to finish it, I picked it up again this month, and started merrily on my way, only to get stuck in the exact same place.  That surprised me; the characters are well written. I didn't dislike any of them. But if one gets stuck twice there must be something wrong somewhere, though I could never pinpoint exactly what. The Rosary, in spite of not being a particularly deep novel (though deeper than High Fences) requires dedication to finish. You must be committed to journeying with the characters, because it won't keep you on the edge of your seat, and it's not a novel of high action. If anything, it's what writers call a 'feminine' plot--not one of a tangible goal, but one of inner character growth.

One reason why I would particularly recommend this book is for its inclusion of Christian characters. Barclay's hero and heroine are a great example of how characters can be openly, clearly, unapologetically Christian. Their Christianity, belief in God, and constant resort to prayer holds a pretty prominent place in every chapter, but it never feels contrived or burdensome. It's beautiful, artistically written, and a refreshing example of good Christian literature.

Well, that's all for today, fellow bibliophiles, but before I go, Suzannah Rowntree is getting ready to launch an EXCITING week of Homeschool Authors on her blog, Vintage Novels. Keep an eye out, and join in the conversation! It's going to be epic. :)