A Man of Legend

Warwick left no enduring print upon the English state. He was an adventurer--a surcharged moment of human experience. It was men's imaginations that he stamped. But in the passing of time, he paid the price of become a legend by almost ceasing to be a man. Perhaps his wife and daughters, and at moments even he himself, felt that he paid that same price during his lifetime. ~Warwick the Kingmaker, by Paul Murray Kendall (Part 6, Chapter 2)

Who is he? Don't know, and don't care, you say? Well, read on, because this is the stuff of legends, and if we learned history this way, we would never want novels. 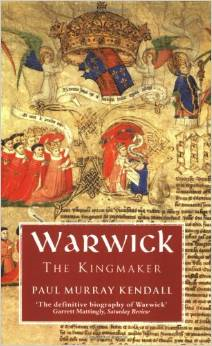 The Book
Richard Neville lived during the time of Edward IV and just before Richard III, at the beginning of the War of the Roses. He raised kings, and toppled kings--raised himself to the pinnacle of success, and then toppled himself by his own hand. And he is a man that every ambitious young person, every student of history, and everyone in search of a jolly good yarn should read about.

The men of England in the mid 1400s declared themselves either York or Lancastrian--and fought for their lord accordingly. Add to this complicated civil war the fact that France and Burgundy were both shifting their alliances back and forth with England, and you have a volcanic age where a powerful man can make his mark. Richard Neville, Earl of Warwick, made that mark like no one else.

Warwick started off his career under the influence of his father and uncle, and took a post as Captain at Calais, the English stronghold in France, under the jealous eye of Queen Margaret of Anjou. There through his bold piracy and capture of Spanish ships, he won the hearts of the men beneath him, as well as the affections of the commoners in England.

As his king, Henry VI, faded in and out of madness, Queen Margaret fought against Warwick's father and uncle as they sought to forward the Neville name and the house of York. Warwick himself started out supporting their campaigns. But when they both died in battle, he felt the call of ambition for himself, and began planning his own revolutions against the Lancastrian king.

With a bold stroke of mastery and troops of loyal men, Warwick overcame discouraging odds and set Edward IV, Richard III's brother, on the throne. He was the man who brought victory to the house of York, and now with his brothers in high government positions, and the Neville relatives firmly ensconced around the king, Warwick held the power he craved to make his name legendary.


He refused to admit there were disadvantages he could not overcome and defeats from which he could not recover, and he had the courage, and vanity, to press his game to the end. ~Warwick the Kingmaker, by Paul Murray Kendall (Prologue)

Years passed, Warwick made even more plans to further his greatness, and he started designing a marriage alliance to unite the kingdoms of England and France--a mighty feat to accomplish after the Hundred Years' War. But Edward proved unwilling to dance his reign to Warwick's tune, and wanted nothing to do with a French wife. When Richard Neville finally pressed him to make his decision, Edward coolly announced to his assembled lords that he had secretly married a Lancanstrian girl, Margaret Woodville, and Richard Neville drew away from the king in a white heat of rage.

From there, Richard Neville's career takes a dark turn. Trying desperately to hold on to the power that was slipping out of his grasp, he tried everything he could to keep the Woodville family out of power, but Edward let them in in spite of his efforts. They ruined Warwick's attempts at a treaty with France, for they were all for the support of Charles, Duke of Burgundy, and England could not support both France and Burgundy. Warwick realized, as he unsuccessfully endeavored to manipulate Edward's foreign policy, that his power with the young king was no longer there. Edward wanted to rule in his own right and his own wisdom.

But Richard Neville wanted to be a legend. Had to be a legend. He could not bear to grow old and fade away in obscurity, and increasingly incensed by Edward's secret marriage to Elizabeth Woodville, dissatisfaction grew into thoughts of sedition.

At first it didn't start out as a plan to topple the king. Warwick merely wanted to bring Edward under his thumb, and secretly called together men and arms. He even succeeded so far as to capture Edward after a stunning victory. But something went dreadfully wrong; the king escaped, and Richard knew he was now branded as a dangerous rebel. Edward kept him at arm's length, and Warwick's reputation as mighty Kingmaker faded away to dust.

When his revolt failed, Richard Neville took the only option he had left.

Tormented by ambition, mad with wounded pride, he fled to the king of France, who welcomed him with open arms, and signed a treaty with Louis XI. In Richard's bid for power, he forsook the cause of York that he had fought for his entire career, and deserted to the house of  Lancaster.

He would either regain the pinnacle of power he had lost, or die in the attempt. And the saga of his last battle for power is an adventure you won't want to miss.

Richard Neville had been born into a violent world and by violence he had died--the maker of Kings at last undone by Kings. Louis had other resources. Edward had blood royal and genius and even, at the end, all the luck. Yet, though Warwick had missed his heart's desire, there must have been moments when he appreciated--for he was a man who watched himself living--that few men had explored so full a range of experience as he. He was of the world worldly, and perhaps as the knife flashed down, this fleck of perception mitigated the bitterness of death and the blankness of heaven. ~Warwick the Kingmaker, by Paul Murray Kendall (Part Six, Chapter Two)


My Thoughts
I took a round-about journey to meet Warwick. Some time ago I reviewed a book by Josephine Tey entitled The Daughter of Time, which started the whole adventure. It's a mystery novel about a detective laid up with a broken leg, trying to while away his recovery time by investigating whether or not Richard III murdered the Princes in the Tower. A few months after I read that book, Richard III's bones were discovered in a car park in England, and the quest came up again. Then a friend set out to investigate the true story of Richard's life. And later this year, another friend mentioned that she was planning to read Paul Murray Kendall's Richard III. To be honest, I can't remember how I ended up with Warwick instead of Richard in the end, but I'm glad I did. And since my grasp of that time of English history was pretty shaky, I was glad to have read The Daughter of Time first to give me a little foundation.

For the first chapter of Warwick the Kingmaker, I had a hard time with the numerous Richards all living at the same time. But I love a good, complicated challenge, and memorized which geographical location went with which Richard. After that, it really wasn't a problem, and I had no trouble with whose son or nephew was whose.

The book is fairly clean; due to the men of the times, there are a lot of illegitimate children, referred to by terms that are considered offensive in today's society, and Warwick's epithet for Margaret of Anjou was not a name that gentlemen should use towards a lady. Also, the Duc d'Alcenon's reception of Warwick's messenger in chapter one of part two was inappropriate to say the least, but that's a short paragraph. That's about all.

What I loved most about this book was definitely Warwick himself. Addicted to power, willing to take mighty risks, and winning them most of the time, too. Here is a man who was too advanced for his age, and who couldn't stand being anything less than great. I said once in a novel of my own writing that "Along with the skills we learn the delight of the heady wine of Chance. The luck--the stakes--the win--they feel exhilarating after you grow more used to them." And truly, that sentence describes Warwick. He planned battles, manipulated kings, sacrificed everything to keep his position of power, and shaped the course of history.


Perhaps Warwick was too obsessed with this quest to realize how miserable Richard Neville had become in these last three years, how his natural warmth of disposition, his grace of character, his love of work and eager embracing of experience, had all been contorted, shrunk, by the spoiling touch of adversity, had been forced into parodies of themselves to satisfy the imperious demands, not so much of ambition, as the word is ordinarily used, but of imagination. He had become the fierce prisoner of his vision of himself, the victim as well as the subject of the Warwick legend. He was a little like Macbeth--the staunch, indefatigable warrior driven to the ruin of all joy by dreams. But it was the airy dagger than Warwick grasped, plunging it into his own character. ~Warwick the Kingmaker, by Paul Murray Kendall (Part Four, Chapter Six)

He's not a man you love, for that would be too presumptuous. He's a man you respect. He's not exactly a man you want to imitate, though his courage, his ability to win the hearts of men, and his drive to do his work well are all good qualities to have. But he's a shooting star across the sky of English history, and as you shade your eyes and look at him, you hold your breath in wonder. He didn't believe in being bound by his times. And all heroes, however faulty and human, hold that idea in common.

This is the first of the books I hope to read about the time of Richard III. I loved it---and any fiction or nonfiction lover will be intrigued by it as well.