On the Edge of the Dark Sea of Darkness, by Andrew Peterson

**Hello, hello! I'm posting early tonight because I'll be gone tomorrow working the elections. You are welcome to read it early or save it for the usual time. Enjoy!  :) 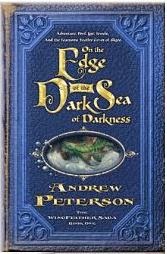 ﻿
Junior B. looked at me with grave concern last night, and asked, "Schuyler, is that a silly book?"

Still mulling over that question, to be honest. And whether or not it's a good or bad thing.

I looked up Andrew Peterson sometime earlier this year, intrigued by the snippets of lyrics I saw here and there on Rachel Heffington's and Jennifer Freitag's blogs. From the line or two I read, he seemed to write truth in a wonderful, magical, soul-enriching way, and I wanted to see what the songs were like set to music. Since then, he's been on constant repeat while I write.

Songs about wrestling with God during hard times, multi-generational faithfulness, yearning for the last tear to fall, glorying in the magic of stories, wrestling to grasp the fierce and legendary epic of God's plan for the world--songs about marriage, and how it's like dancing in the minefields--beauty and peril hand in hand every step of the way. In the midst of a difficult year, Peterson's music was exactly the kind of soul-nourishing, God-glorifying playlist that I needed.

So when I stumbled across his online community, the Rabbit Room, and found he wrote a fantasy series, I ordered the first book from the library right away.

It's so outside the box of anything I've read before that I can hardly encapsulate it in words. But I'll try.

The Story
[From Goodreads:]
Once, in a cottage above the cliffs on the Dark Sea of Darkness, there lived three children and their trusty dog Nugget. Janner Igiby, his brother Tink, their crippled sister Leeli are gifted children as all children are, loved well by a noble mother and ex-pirate grandfather. But they will need all their gifts and all that love to survive the evil pursuit of the venomous Fangs of Dang who have crossed the dark sea to rule the land with malice and pursue the Igibys who hold the secret to the lost legend and jewels of good King Wingfeather of the Shining Isle of Anniera.

My Thoughts
On the Edge of the Sea of Darkness is equal parts disgusting, hilarious, and original. And I mean high doses of all three. The evil Fang lizards eat the most horrible food I have ever read about, and Peterson takes as much delight in describing it as a ten-year-old boy would. But Oskar the bookseller's constant quotes, Peterson's laughable footnotes (which would make Tolkien roll in his grave at the idea that anyone could take creating a fictional world so lightly) and his creative appendices, names, and geographical locations help to balance it out, albeit some of the names are just plain silly. (Yes, Junior B. You were right.)

It's been a long time since I've read this flavor of children's literature, so much so that my sense of dignity was left rather flabbergasted here and there. This, my fellow bibliophiles, is not Little Lord Fauntleroy. But as I read it, I wasn't offended by Peterson's bold and boyish way of expressing himself. On the contrary, I got the impression with this book that it was written for the sheer joy of it. It doesn't hold the anguished passion of man who has to give his message to the world, or the careful crafting of an author who lives in their own universe for decades--it reads like a dad who's having great fun writing a book he would have loved to read as a kid. I like reading a story like that--the good macaroni-and-cheese of literature, as Suzannah Rowntree likes to say.

And that's the best way to describe this book: macaroni-and-cheese, with ketchup on top in some places, just the way kids like to eat it.

You won't find any language. You won't find any sex. You'll find plenty of gag-able scenes, and I took the liberty of pausing my perusal so I could actually enjoy the Angus Philly cheesesteak my nice brother treated me to for supper last night. On the Edge of the Sea of Darkness is perfect for boys, and the 8-11 range is probably just about right, though girls will enjoy it as well, and it might be a great read-aloud, depending on the parent's personality.

The family theme is strong--Nia's character as the mother is very strong. She's a mature single mother trying to instruct and protect and sacrifice for her children. Sometimes she kisses them, and sometimes she scolds them, and she's a beautiful picture of the security every mama tries to be to her young ones. And the children find great security in and try to deserve the good opinions of their mother and grandfather.

One of Peterson's greatest charms is that he writes with the maturity of an adult without forgetting what kids like. There's plenty of high suspense, just enough blood to be interesting, and dogs and creatures and dragons in plenty. He always makes sure the adults fix the problems, but doesn't deny the fact that kids sometimes go off adventuring on their own when they're not supposed to. In other words, he doesn't write his young characters with same the moral maturity as their parents. Janner doesn't always like the fact that his mother and grandfather impress responsibility on him, and Tink goes exploring in places he knows he shouldn't. But Peterson makes right clear from wrong at the same time--the ethics are a little situational here and there, but I hand it to him that he captures the way kids think.

The combination of beauty, normalcy, childlikeness, and maturity is entirely his own. I think I'll look up the next one eventually. But for now, I'm going to return to my new, large Bonhoeffer biography to recover.

P.S. And here is the link to Andrew Peterson's YouTube channel. It doesn't have a lot of his songs, but it will give you a little taste of what he's like. And if you'd like to listen to "Many Roads", check it out here.
Posted by Lady Bibliophile at 10:02 PM