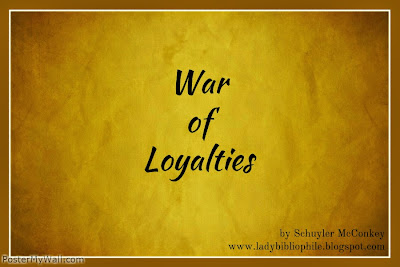 Here are some November snippets for War of Loyalties! I hope you all enjoy them. :)

Jaeryn stood with his mouth open in frozen shock before recollecting himself. "I was under the impression you wanted a career in intelligence. That's what Ryson told me."
"No, I only came for one assignment. As soon as it's finished I'm going home to set up a practice," Ben reiterated.
The surprise of his words effectively silenced any further questions Jaeryn wanted to ask. He was rather dumbfounded for the rest of the afternoon, and didn't attempt any more personal inquiries. But Ben could see the green eyes processing their conversation as fast as the slim white fingers scrawled out prescriptions, and he had no doubt the doctor would be back with more questions in future.
***
"Speaking of letters, I'm going to write to my parents after supper. Am I allowed to mail it with my real name?" The corners of Charlotte's eyes creased in laughter. "They'll want to know what I've done with you if I put Dailey on the envelope."
***
She wasn't the prettiest woman he had ever seen--more pale than rosy-cheeked, and rather too slender than not. But she had soft skin, and a smile that was gentle or bright by turns, and she always carried herself straight and tall with her head held high and a ready word for everyone she met. After a few months of friendship at medical school, he loved her too much to graduate and go his way without her.
***
Jaeryn stirred his tea with his spoon. It was cold by now, simply a conventional cover for the conversation; and there was nothing he hated so much as cold tea.
***
Fenton raised an eyebrow. “Do you mind telling me the reason for your interest in him? You don't show such affection towards the rest of us.”
"Perhaps the rest of you lot aren't worth my while," Jaeryn retorted.
***
Jaeryn frowned, then held up his hand for silence, and cocked his head to listen again. "Are you sure you don't hear a plane?"
Ben strained to hear the thrum of an engine above the clatter and clang of the market. "No, I--" Then he, too, caught a faint droning, followed by a muffled rumble, and the hair rose on his arms, though he could not have said why.
***
Fire raged in the remains of the grocery across the street, and a team of men worked frantically, pouring sand to try to smother it. One of them, a muscular fellow whose red hair was streaked black with soot, held the position closest to the fire and worked with a will, but he paused to wave as Jaeryn came out of the clinic.
Jaeryn waved back and shouted urgently, "Tell me where most of the casualties are."
"Bouverie Road, doc," the man yelled. "This place is the worst, but they'll need help there, too."
***
"The pane of glass shattered in my face. Do something, for mercy's sake." Jaeryn grimaced as he spoke, and the blood trickled in rivulets down his face, turning Ben sick with the sight of it.
***
Oh God, have pity and let her not be there.
***
The sound of the Channel waves' ceaseless roar against the rocks greeted Ben when he opened the door the next morning, and he hurried out to look before heading into town. A cool breeze filled the air with its salty tang, and the sky showed mother-of-pearl and pink in the sunrise. Light mist as airy as gossamer thread hovered over the water, hinting at rain later. Far above him, the gulls circled back and forth on the wind currents, calling to each other with shrill mews. He breathed it in, content to soak in the calm and leave the world behind. It calmed the nervousness that he felt in starting his first day, and almost made him anticipate it with pleasure.
***
"You're a filthy parasite," Jaeryn groaned, returning to the present
"You asked for my services, didn't you?" Fenton looked up at him with shrewish eyes. "I give them in my own way or not at all."
***
Jaeryn came up then and gave a frosty nod to Mrs. Miekle, who returned one of her own with the same degree of coolness. "Dailey, don't forget that you're in charge of the calls tonight," Jaeryn said."I have some errands to run, so I suggest you drop Mrs. Dailey off home as soon as possible and come back to the clinic."
"Ye're in an awfu' rush, aren't ye, doctor?" the postmistress said sweetly.
"Yes, ma'am. I like to keep busy," the Irishman replied.
"An' a good resolution too, so long as a body keeps busy wi' honest work."
"Certainly." Jaeryn touched his hat brim in farewell.
***
Ben roused himself. "He's a gentleman, and a rich one at that." Jaeryn had to strain his eyes to see his assistant while they talked, but he could sense the young American had relaxed from his usual reserve after an evening out, and he was glad. "His voice is almost hypnotic," Ben said. "So deep and smooth he wraps you around his little finger without you even protesting.  I don't envy the side he's working against, whichever side that may be."
***
Ben reached out and smoothed down her hair as innocently as if she really were as young as she looked. "Don't worry anymore. I will take care of you."
***


The stranger grinned, and thrust his hands in his pockets, obviously confident of his powers of service...."It was a pleasure. She's a pretty little acushla."

All text from War of Loyalties, by Schuyler McConkey.

Posted by Lady Bibliophile at 7:35 AM