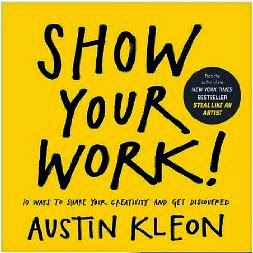 I continued on with the Austin Kleon adventures by picking up Show Your Work from the library. This guy is awesome for his common sense and clarity, two key qualities every writer/blogger needs to have. I'm ready to ditch the plethora of media-navigation articles I've been collecting and pick up this book instead whenever I'm looking for some direction.

The Book
[From Amazon:] Show Your Work! is about why generosity trumps genius. It’s about getting findable, about using the network instead of wasting time “networking.” It’s not self-promotion, it’s self-discovery—let others into your process, then let them steal from you. Filled with illustrations, quotes, stories, and examples, Show Your Work! offers ten transformative rules for being open, generous, brave, productive.

My Thoughts
Social media is the beast that all of us bow down to in the modern age, especially if we're wanna-be authors. Go to a writer's conference, talk to an agent, and the first thing they'll tell you is grow, grow, grow that platform. It's overwhelming, and the temptation is to go out in the highways like the king with no guests and pull in anyone who can be begged, borrowed or bribed.

My studies of social media only left me with questions. How is one to get the 1,000+ requisite followers necessary to attract decent publishing houses? And what does one say on social media? After all, I may like the socks I put on this morning, but I don't flatter myself that everyone wants to hear about them. Months after the writer's conference I attended, the social media aspect of it left me depressed and jaded. The manipulation I heard about didn't seem like a very God-glorifying or enjoyable way to get to know people.

Kleon takes this subject from a different perspective. Instead of focusing on how to increase your numbers, he focuses on creating community--the kind of social platform where you can share your work and your friends can share theirs--a mutual conversation where friends are created instead of fans. Slower? Perhaps. But everybody's looking for genuine platform, and if you have it, your work will pay off. Genuine friends are much better than half-hearted fans, and will go a lot farther.

In my reading of the book, these two principles especially resonated with me:

Be honest. It is hard for me to open up completely on the internet. There are certain likes and hobbies I keep secret because I am afraid--afraid people will judge me, afraid I could possibly lead them astray, afraid they will misunderstand my commitment to the Lord. Ok, so I did show my Lord of the Rings fandom, but heaven forbid I should confess that I listen to Celtic Thunder on a fairly regular basis. Some songs are fine, but others are not, and I don't want people thinking I listen to the bad ones. All that is is pride and fear, and something I have to come to grips with.

While I seek to be sincere with every post and comment, sometimes I don't pour out as much as I could because I am writing in the fear of what other people think instead of fearing God alone. Learning what to share, how to share it, and when to share it so God can be glorified is a journey that I'm on. Being willing to be open in a redemptive, not self-indulgent way is my end goal. It takes time, but I cannot think of a better place to work it out than with the dear friends I have found through this blog.

Be generous. If you want people to like you, then it is very important to be generous to them as well. With the measure you use it will be measured unto you. And on social media you have to get used to following people on Facebook, Instagram, Twitter, and Pinterest. Don't follow them because they're perfect (though be wise about who you hang out with and recommend). Follow them because their work has invested in you, you would like to be friends with them, or you see something worth supporting and recommending. If you like them a lot, chances are you should show them a little link love and let others know you like them too. Don't be stingy. Christians are already too stereotyped by that. That ties in with the above point; often people who are afraid to share themselves are afraid to like others--because who you like shows a piece of who you are. It takes courage--but the courage to invest in someone else is well worth it.

Share Your Work is for anyone--reader, writer, blogger, crafter, sewer--who has work and wants to share it with people, even with the eventual view of selling it. Wanting to sell your work is not an unholy objective (Kleon discusses this as well) and this book will help you forge some genuine connections on the internet. It clears the murk and takes away a huge amount of pressure, as well as putting the joy back into the tweeting and the blogging.

For those readers who would like to be aware, Share Your Work does include some crude slang, and the included quotes on pg 78 and 195 are particularly inappropriate. I got a sticky note to cover the one on 195 because I hated having to flip through it.

Austin Kleon puts the common sense and the enjoyment back into growing your social media platform. I cannot express my gratefulness. Steal Like an Artist and Show Your Work are books I'll be dishing out my hard-earned cash for as soon as I can. From a girl with Scottish and Dutch heritage, that's the highest recommendation I can give. ;)

Posted by Lady Bibliophile at 9:45 AM