A Season of Shadows, by Paul McCusker 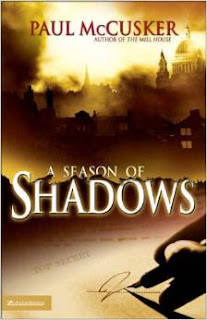 In the golden age of spy novels, John Buchan stands out as a master of plotting and story.

But unknown to many readers, Paul McCusker does too. Well known for his work with Veggie Tales and Focus on the Family Radio Theatre, or even his help with the Revolutionary War film, Beyond the Mask, perhaps his books are overlooked. A Season of Shadows deserves a spotlight. I've read it twice now, and it was just as crisp, classy, and wonderful as the first time.

The Book
Julie Harris has everything...a huge house, a husband with the blue blood of Washington elite, and a life full of everything she wanted. Until everything goes wrong. Her husband drugs her at a party, and when she wakes up, he is dead, crashed in a car with another woman. His love, their decadent existence, and her reason for living, is gone.

Approached by an old family friend for help in the war effort, Julie trains with MI5 and transfers to the American Embassy in London. Officially: to file paperwork. Unofficially: to infiltrate a group of Facists called the Thursday Group. Her husband helped out the Thursday group in his Oxford days, and died in company with an undercover female spy. Something doesn't click, and they want to know what he was up to. With the help of the swanky Colonel Mills, the daredevil Anthony, and a Chesterton-loving priest, Father John, Julie navigates a brand new world of double lies.

But the truth is devastating. And the lies aren't pretty. Soon she finds that the escape she seized has led to an imitation existence more frightening than the sham life in Washington. Set during the Blitz of 1940, this spy novel is sure to keep you on the edge of your seat.

My Thoughts
First, the plotting. I can appreciate this book as few probably can, both as a writer of fiction, and a writer of spy fiction. It's far from easy, and Paul McCusker's effortless, twisty, breathtaking plots are the result of years of hard labor, I'm sure. His experience as a writer shines through in just how wonderful and tight this book is. He gives you everything you need to know and then fits the puzzle in an entirely new way from what you would expect.

Second, the character journeys are fantastic too. It didn't occur to me until the end of the book that Julie spends the whole book as a non-believer. She's so normal, unlike what most Christian authors would portray as an non-believer--not a curmudgeon or a despot--simply a very normal, lovely, conflicted woman. Her journey to realizing her blindness is relatable and natural. The love of Christ shown through Father John is true and inspiring. I love the faith McCusker portrays in this story.

Third, the war atmosphere tightly weaves into the plot. Not only the Blitz, but everything from the restaurant shortages to the water rations in the bath. Rarely does an author manage to strike a happy balance between plot, characters, and time period. McCusker hits all three right out of the park.

Not only that, but he also touched on the conflict of living a double life in a spy's world, and the pain of agents knowing that they are dispensable pawns for the war effort. All the right notes, hit one after another. A joy to read.

This book includes mature content. Julie has to investigate her husband's affairs as part of the spy plot. She meets some of the women he's been involved with. While it's handled appropriately, and demonstrates just how empty their lives are as unbelievers, it would be a better book for 16 on up in that regards. Some mild swearing is included, but not much.

If you're looking for a great summer read, this is it. Suspenseful, thoughtful, high-quality Christian fiction. I highly recommend giving it a try.
Posted by Lady Bibliophile at 9:21 AM