The Prince of Fishes, by Suzannah Rowntree

Guess what? Suzannah Rowntree has provided another fairytale retelling to delight the hearts of bookworms! This time, it's a Byzantine tale entitled The Prince of Fishes. 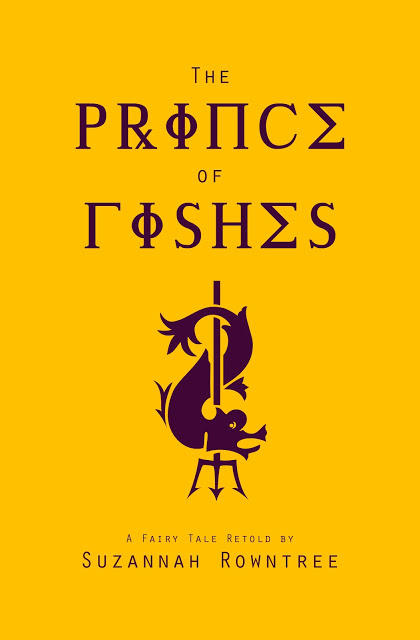 Isn't that cover gorgeous? I love the purple font (especially the font) on the yellow background. Vivid and complementary combination. This is my favorite of the three she's done so far.

The Book
Humble fisherman Micheal lives with his wife Eudokia and two children in the stinking alleys of the city of Constantinople. When a magical fish crosses his path, promising him anything his heart desires, he and his wife see a chance to better themselves. But one wish is never enough, and as their thirst for power grows, so too do the consequences to themselves and their nation. Set during the wars of 700s Byzantium, this book weaves theology, history, and fantasy masterfully together.

Novella, approximately 33,000 words, based on the fairy tale, The Fisherman and His Wife.

My Thoughts
I knew the original fairy tale from watching Rocky and Bullwinkle cartoons, and felt like I finally had an edge going into this story. :) Suzannah shows a more-than-competent grasp of the setting and time period. I don't know a lot about Byzantium, but as I read, I had no doubt she did. It shone out especially in the warfare scenes, where she named ship parts and weapons like nobody's business, and also in the palace, with the clothing styles and titles of the various men. The Iron Hand and passing mentions of clockwork servants and sea serpents added a fun twist to the tale.

Eudokia deserves five stars for most colorful character of them all. The ambitious fisherman's wife, she's funny, terrible, impetuous, and constantly cracked me up. The way her husband would carry on imaginary conversations with her was brilliant. I knew she was full of faults, but I loved her. I wouldn't have minded seeing more of the daughter, Anna. She felt unnecessary to the plot, especially for a short story. Micheal (the fisherman) had a perfect character arc, and artistically it was well-done. But what kept me from loving him was the fact that he reacted to almost everything instead of taking steps of action as the story progressed. That, however, ties to a good thing, which follows.

It's always interesting to see what theological things Suzannah's going to tackle next, and with this book, it's no exception. The war over icons in the church further ties into and supports the richness of the setting. That was the obvious one. A not-so-obvious, but just as good plot, is what happens when a wife forces her husband to agree to her every whim, and a husband meekly does things he doesn't approve of for the sake of peace.

While Pendragon's Heir and The Rakshasa's Bride I found historically vivid and personally compelling, I wasn't emotionally gripped by The Prince of Fishes until the very end. The last two scenes, however, had me riveted, and provided a startling, just, and satisfactory ending. I wondered how she was going to resolve the hole the characters had dug themselves into. But she did it just right.

The Prince of Fishes released today, so you can run out and grab your own copy of this excellent fairytale retelling for $2.99 on Amazon.

I received a free copy of this book from the author in exchange for an honest review.

P.S. Want more of Suzannah Rowntree's titles? Check out my review of Pendragon's Heir!
Posted by Lady Bibliophile at 9:01 AM