The Book that Taught Me to Love the Home (The Franzon Trilogy, by Thyra Ferre Bjorn) 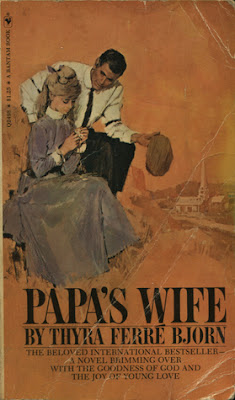 I grew up knowing that the family unit was designed by God for a special purpose: to be a unit of parents training children, and everyone working together to bless their community. The home is a precious place of growth, refuge, and character development. And girls, especially homeschool girls, are raised knowing that being a wife and mother is a beautiful, God-given thing.

It was hard to feel that way as I grew up, though. To connect the head knowledge of God's Word to the heart knowledge that I just wasn't there yet.

I've always loved academics; I think God has gifted me in English and writing areas, and he wants me to use those gifts. But I didn't want to ignore the verses in the Bible about God's heart for women: treasuring family and keeping the home. At the end of the day they left me kind of indifferent. I was OK with getting married, if God wanted that, but I felt there was a lack of passion that should be there. I knew I wanted to change, but I didn't know how.

One of the biggest mistakes I've made in the Christian journey is to think growth is instant. I see a lack in myself and I panic, thinking I'd better fix it right now or else. Slowly and painfully, I'm learning that growth is a process where God lovingly leads his children one step at a time. I knew that this was an area the Lord wanted to work in me, not something he wanted me to work in myself.

With the love for family, he led me first to a study called True Woman 201. I'll be reviewing it next week. The authors gave a beautiful explanation of the varied and beautiful ways God calls women to serve him. All women are commanded to love the home, husbands, and children with a phileo love--a love that genuinely enjoys those things, not a sacrificial, teeth-gritted duty. But women can still use their talents for other areas while loving the home. That showed me that the two loves I had, while I thought they were so separate, can actually be joined together to make one powerful mission focus: working in the areas God has called me to glorify him, while having a passion for the family unit he has put me in.

The real moment of revelation was another book. Three books, actually. I've had a hardbound trilogy sitting on my shelf for two or three years now, waiting to be read. On a whim (what I thought was a whim) I picked it up this summer. It's a trilogy by Thyra Ferre Bjorn about a mother and daughter: a real life Swedish pastor's family that immigrated to America. The picture of family was so homelike that I couldn't get away from its pages. It held simple charm, ambition, and trust in God's goodness. Just a childlike faith, and deep love for taking care of husbands, children, and grandchildren that one woman passed on to all her daughters.

And I got it. I got it. The heart connection always comes for me through a person. A story about a person in the Bible, a fictional character, or a real-life person. Through the people in this story it clicked, and the love came in. I wanted the picture of family they gave. I loved it, and I saw how family was precious. This story didn't really stop to teach anything. It simply demonstrated how family and children and the routine tasks of keeping the home are an act of worship and blessing from God.

Here's are the three books, and what I learned from them.

Papa's Wife
Sixteen-year-old Maria gets a job as a housekeeper for a middle-aged Swedish pastor. But she doesn't just want to be his housekeeper. She wants to marry him. In a startling turn of events, in which Pastor Franzon isn't quite sure whether he proposed or she did, he finds himself with a wife at the parsonage, and a baby on the way. The first baby has red hair, which horrifies his proper, starched-up heart. The second baby has beautiful golden hair but cries throughout the night, a further exasperation to his nerves. But as each baby comes, his heart slowly relaxes and softens. Maria is good for him. Family is good for him. And her example of respect mixed with spunk is a humorous and encouraging look at the joy one woman took in raising eight children as a minister's wife.

But eight children aren't quite enough for Maria's ambitions. She wants them to be well-educated, and what better place to educate children than that beautiful, far-off country, America? So in another whirlwind that leaves Pastor Franzon just as bewildered, they transplant to the land of the free. As her children grow and leave the nest, she maintains a deep love for serving her family. I've never seen a woman so fulfilled and delighted in the home as she was. 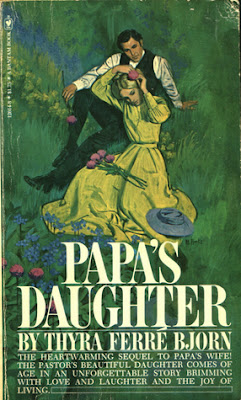 Button (Thyra) Franzon, Mama's oldest daughter, had a rockier path to happiness than her mother. Her childhood was filled with terrible mischief; her girlhood with secret meetings with a local boy by moonlight. When she moved to America, it took her a long time to settle in and learn the English language. When she grew up, her parents wanted her to marry a pastor, but (with their blessing) she chose to marry a quiet, unromantic mechanic instead. At first her marriage was happy, but as her daughters grew she sank into a depression it took five years to discover a cure for. To be honest, I get depressed reading books about depressed people. But this book held more than that: Button's depression was because her life wasn't complete. God had given her the ability to process thoughts and emotions through writing (sounds familiar) and for years she had forgotten or ignored that call. When her life felt grey and worn-out, it wasn't because she had drifted from God. It was because there was a lost love for writing in her heart waiting to be released. I read eagerly as she learned to write again, finding healing and fulfillment through that writing, and waiting for the glorious day when her first book would be released. It was a precious tale.

Mama's Way
This last book is less a biographical story and more a collection of reflections on the power of prayer throughout Button Franzon's speaking tours. She tells stories about prayers for safe travel, for the lives of people she impacts, and from her personal diaries. She keeps it simple: not a theological treatise, but just story after story about how God has cared for and answered her on things big and little. She calls it Mama's Way because she learned it from her mother. Maria Franzon prayed over everything from people's lives to asking God to help the bread rise properly. It's a way of prayer familiar to me. I pray over everything from people's spiritual struggles to asking God's help as I make a left turn on a busy street. This look at prayer will give you encouragement to view it as an intimate and precious conversation with your Heavenly Father. I know that's what it did for me.

These books meant a lot to me because they combine three of the elements that I consider most important: family, writing, and prayer. It's almost as if God had those women live such beautiful lives and write such beautiful books to feed my soul all these years later. Maybe he did. But I know I'm not the only one they could impact. I think these simple stories would do a lot more for homeschool girls than all the (admittedly wonderful) nonfiction books about contentment. We need real examples to imitate. This book contains the legacy of Titus 2 lived out in a natural, beautiful way. I promise, as you read these pages, you'll feel loved and nurtured. I hope you enjoy them as much as I did.
Posted by Lady Bibliophile at 10:44 AM