The Shattered Vigil, by Patrick Carr 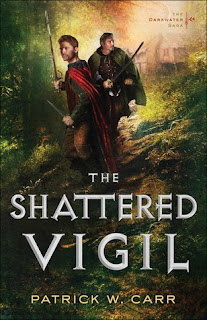 (To see the first book in this series, check out my review for The Shock of Night.)

I love Patrick Carr's fantasy books. But if I thought A Cast of Stones was epic, the Darkwater Saga basically took Patrick Carr's first series tension x 1000 and escalated from there. I don't think my heart could take more than one release per year.

My Thoughts
Willet, the main characters is just as good as ever. I love him. He has a pleasing sense of sarcasm, a compassion for the poor people of the town, and a good balance of manly stoicism. He carries on what I loved about the last book while peeling away deeper layers of personality. Carr surprised me by Willet's occasional unreliable narration--not because he's lying, but because the vault in his mind from his past plays tricks on him. Willet doesn't collapse under the pain of his past like some characters, but he still feels it, even though he's gone on and formed a stable life for himself.

The array of side characters is good too: Bolt, Willet's guard, is ready with a sword or a proverb depending on the situation. The Mark, an urchin lad seems to value his own worth quite well in the midst of the prestigious company he's keeping. :) And Pellin, the unwilling head Vigil leader. I don't envy Pellin having to keep all the Vigil members with their various personalities in line. Each character has to deal with hard moral choices, heart wrenching decisions, and the weight of responsibility their gift of mind-reading brings. Lady Bronwyn's plot especially, as she faces the limits of her powers and all the memories she has collected over the years, lingered. It must be hard to have an unchosen gift that requires you to carry the joys and sorrows of countless people all the time.

Sometimes I was a confused trying to remember side characters from The Shock of Night, but not too often, and that's my own fault. I should have refreshed my memory by glancing at book one. It really wasn't too bad, though. There are four Vigil characters who have POVs. Each Vigil character has an urchin companion, a guard, and a job to accomplish. It's not too hard to follow. In fact, don't let the size deceive you: The Shattered Vigil is a fast read.

I'm not too keen on the latter half of Gail's plot yet and how she found a way to be with Willet. It fit with the story plot, but it seemed a bit cliche for female power in modern literature. The only other thing I really didn't like was the unnecessary description of courtesans/tavern women in a couple of places. There were two brief descriptions in particular that felt unnecessary either for atmosphere or for the plot. It's like finding decayed spinach in your salad.

Due to a plot line towards the end of the book, I strongly encourage this book for 18+. Highlight to see sensitive thematic elements: One of the characters is raped off-screen, but it's quite intense. Her grief is handled in a very true and empathetic way, not brushing over it or offering trite comfort, but it's very heavy to read about, especially pages 357-363 and you really may want to skim pages 414-415. Another character remembers being hired out. Not all readers may wish to be exposed to this.

Out of all the plot lines, Willet's was still my favorite. I love his companions most--Bolt and the urchin Rory--and knew exactly what he was trying to accomplish. Plus we got to see more of the town from book one, and tie up some plot lines. Willet feels more seasoned than Erroll (A Cast of Stones), but still super interesting to read about.

Now I'm going into shock and recovery mode so I can be emotionally stable for the release of book 3. ;) There are so many intriguing questions about Willet and the Darkwater that I want to know. I can't wait for the big reveal, and I hope my favorite characters make it to the end.

If you want an intense fantasy with deep emotional conflict, a fast pace, and characters funny and heart-wrenching by turns, The Darkwater Saga is for you. There's so much at stake. So much emotion. So much grief. So much forging ahead in the face of unknown mental fear. I'm convinced that mental fear is even more emotional than huge creatures or armies. Sometimes the fear of ourselves or of our comrades is the biggest thing we ever have to tackle.

I received this book from Bethany House Publishers. All opinions expressed are my own.
Posted by Lady Bibliophile at 8:03 AM