Of Reading Minds and Dark Forests 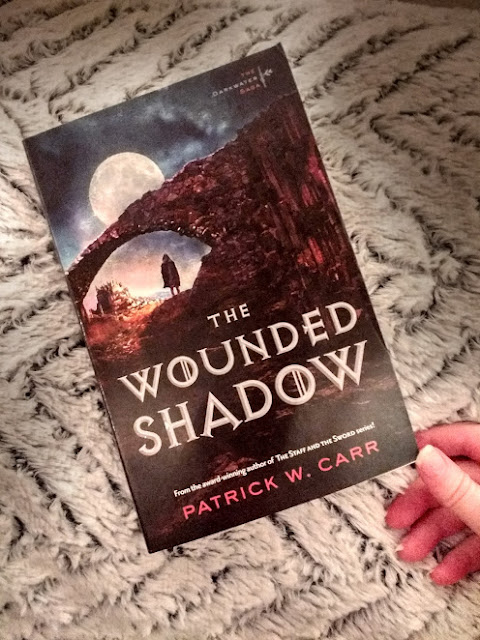 I sat in the car in the middle of Texas city traffic, glued to a story of terrible intensity.

It was a new trilogy; the story of Willet Dura, a reeve who investigated murders for the king. Burdened with a vault inside his mind, Willet Dura remembers spending a night in the Darkwater Forest when he fought in the war. But he can't remember what happened, or anything about the evil that dwells there. The Darkwater leaves a vault of evil inside the mind of every man who enters it—turning them into murderers when the vaults open after sunset. Normally people with vaults are destroyed, their minds shattered because of the unknown evil inside them. But Willet can't be destroyed yet--because, along with a handful of other people in the land, he has the gift of domere--reading people's minds.

This story led on some pretty intense curves. Book 1 I barely made it through, it was so intense (but I’ve since come to love it and read it again.) Book Two I had to ask for an extension on because a poor character endured so much, and like the terrible villain of reading ahead that I am, I knew before it happened and was crushed by the anticipation. That doesn’t sound like a recommendation, but Patrick Carr is honestly my favorite fantasy author of the 21st century. I was so excited to read the ultimate climax of the Darkwater in book 3, and it flipped any theories I had on their head. And no, I didn’t read the climax ahead of time. ;)

Echoing the thoughts in another review on Goodreads, I love how Carr’s characters have to face so much vulnerability about their own flaws—both Erroll (Staff and Sword trilogy) and Willet (Darkwater Saga) have serious things wrong with them—but they’re willing to seize hold on the adventure that comes anyway. Willet is a man of sarcasm. Of a recklessness that I can relate to. (“I’m tired of overthinking, let’s just take this jump and see if it works.”) He’s seen more than Carr’s other MC Errol has, but still has a heart of compassion in spite of the hard murders and gritty evil he’s had to face. He is broken by pain, but not brittle. And man, I just love hanging out with him. He’s a comrade. A guy whose loyalty you can count on. Someone you want to protect. And in spite of being broken, he isn’t an emotional wreck. He’s still in many ways a normal, emotionally stable guy that can honor his king and fight for good. He has the best of wholeness and brokenness entwined. And his friend, Bolt? Best crusty, sarcastic sidekick on planet earth.

Book 3 had some big questions to answer. And for the most part, it delivered a terrifically fun adventure that I devoured in a week. The backstory took me a bit to adjust to, because it felt even more fantasy and slightly Silmarillion-esque than the rest of the series. Some of Willet’s relationship with Gael in book 2 felt like an Anakin and Padme misstep. I think it got better in book 3 when they had some key big adventures to go on together. There was one moment in the climax where I would have loved to have seen the aftereffects be slightly more intense, even if just for a scene or two. Honestly, they’re small quibbles. I loved it. I wanted to love it. The Wounded Shadow did a fantastic job of wrapping up a lot—and Patrick Carr puts a lot in his books. I couldn’t have asked for more from the conclusion.

I liked the unanswered questions too. The ungiven endings. Maybe it’s making room for a future series (and I’d sign up to return to the Darkwater any time) but I think it also illustrates a reality. Like Gandalf says in Lord of the Rings, we fight the evil in our generation, and our children will have to fight too. This book illustrates that quote really well. The Wounded Shadow also illustrates the importance of taking the time to love, no matter how much time is given you. Love well. Love now. Don’t wait. While that surprised me, I liked the conclusion that Carr drew.

One of the themes in both of Carr’s series is the religious leadership learning that it has done wrong because of centuries of misunderstanding. It makes me think of the reactions the Pharisees had when Jesus came. They wanted to follow God, but when Christ arrived, they didn’t understand the signs because they had a broken way of doing things. Just to clarify, this story isn’t meant to be an allegory of that. But drawing the parallel is interesting. Like them, the Vigil had the right heart, but sometimes misunderstood the application. Carr’s characters have to face the fact that they have sinned and taken blood unnecessarily. They have to face past memories and a new way of working together. Eileen’s plot especially illustrates the religious elite re-learning truth in a beautiful way.

If you’re looking for a parent guide, some of the elements might be a bit PG for younger readers (Willet and his band have to go to a big city where immodesty is rampant and marriage is held extremely lightly). Carr did extremely well building new cultures even in book three, and the city didn’t bother me particularly.

So in conclusion? The Darkwater conclusion had one more round with characters I loved and enough drama to fully satisfy as a climax. I enjoyed that midnight chase in Cynestol. The scenes in the besieged Treflow. The interactions of flawed characters making choices to heal or break. Ealdor’s revelations. Bolt’s moment of sacrifice. Mark’s beautiful heart for redemption. It’s a series I definitely want to read again, and I can’t wait to see what comes next from this author.

This book was provided by the publisher. All opinions expressed are my own. Positive opinions were not required.
Posted by Lady Bibliophile at 8:32 AM