The End of These Days 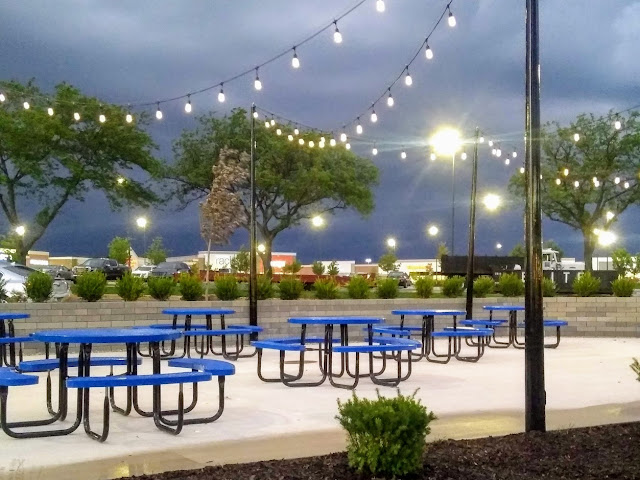 Tonight we sit under strings of lights in the middle of a shopping mall parking lot. We have chocolate peanut butter shakes from Five Guys, and we are giddy on them. These are the last days of August, and hints of fall are blowing into our lives just as gathering storm clouds band together in steel and navy above us.

The lightening strikes, but we don't worry. It's far enough away so we can grab Instagram boomerangs and my mom can snap book stack photos. There's enough space to sit and feel the summer wind playing around our faces. It's pleasant, with the faintest kiss of the season to come.

September is just around the corner. My favorite month. But this summer is worth lingering to remember.

We road tripped with friends, went to writers' conferences and Bible Bee alumni reunions, slept in gloriously, and continued our education in Marvel. We named succulents after the Avengers, discovered a little dessert cafe, lingered on the shores of Lake Michigan, and talked with friends about homeschooling. We made decadent strawberry frosting and drove a new car and watched Disney films we never saw when they came out.

My laptop was sent away for repairs. I started taking the wheel solo again after car accidents earlier this year. I hugged the ones I loved, tackled math long forgotten from high school, and wrote a literature guide for my students this fall. I added words upon words upon words to War of Honor and started volunteering at the church we love.

The grace is staggering.

"Therefore I tell you, do not be anxious about your life, what you will eat or what you will drink, nor about your body, what you will put on....Look at the birds of the air; they neither sow nor reap nor gather into barns, and yet your heavenly Father feeds them. Are you not of more value than they?" Jesus says.*

We studied this Matthew passage earlier this year. My sister made the comment from it that God cares for things that will be destroyed, can't earn their food, and can't praise him for it--a gratuitous beauty, she points out (a term originally coined by artist Makoto Fujimura). While parts of this winter and spring felt like a desert place of waiting, this summer held a gentle rain of that gratuitous beauty. Those little things that will be destroyed. The things we cannot earn. But the steady stream of a Father's love that even in the transient memories, imprints its joy on our hearts.

Tonight as we sip our Five Guys shakes, the far away lightening flickers near enough to send us back to our van. We've just come from our favorite bookstore where we turned in summer reading lists. I almost didn't sign up this year. Early this winter I felt a quiet sense that it would not be the year where I got a lot of reading done. But I did sign up, and I'm glad. Those ten books found their way to differerent areas of my heart, nurturing writing (Story Trumps Structure, Steven James) trust in God (Trust, Lydia Brownback) beloved old friends (Kidnapped, Robert Louis Stevenson) making decisions in grace (The Next Right Thing, Emily Freeman) gut-wrenching honesty about disappointment and faithfulness (Remember God, Annie F. Downs) and the work of a recent hero (The Big Book of Beatrix Potter). They poured in during the school off-season, and they will bear fruit when time to read is more rare and precious.

Speaking of rare and precious, I miss this blog dearly. I miss the Tuesday and Friday posts I wrote every week without fail. But I hope this place can be like a phone call with a friend after the two of you have grown older--sweet when it comes, and nonetheless glad for the absence. I don't have plans to go anywhere. I'd love to come back regularly. I'll just have to wait and see how that can happen again. In the meantime, I have some things coming your way which will be a joy to pass on to you--a website and newsletter goodies I've been designing thanks to Katie Phillips' expert tutelage; and of course, a sequel to War of Loyalties which will come as soon as it is full grown.

We are entering the days of purpose with the upcoming school year. There will be stacks of homework and new rhythms to embrace. But a few days of freedom remain. On the way home from our shakes, a white church spire stands tall against a freshly washed sky. Further up towards home, orange and purple cluster along the horizon like an artists' canvas. The end of these days is a quiet revel of bright memories. The end of these days is grace.

“Have you heard of a place called Inik Katsuk?” The world seems to have gone quiet again.
Inik Katsuk, the Seventh City.
I nod.
“Have you seen it?”
“I have only heard of it in tales.”


“And do you believe them, these tales?”

Friends, it's a joy today to host a very special treat in the form of a brand new book you're going to love, and a little talk with the author herself--Emily Hayse! Her second novel, Seventh City, released this week. An Alaskan-inspired fantasy full of a missing city, an unbreakable sibling bond, and a perilous adventure awaits your reading pleasure. I just got my copy this week, and I love it so much. 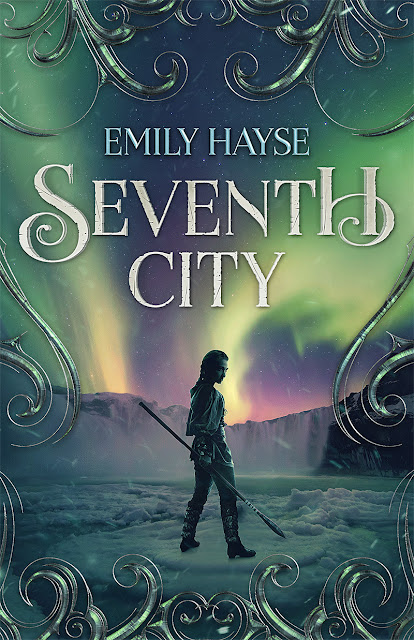 “Let me tell you a story that happened so long ago that only the hills and rivers can remember the time . . . .”

All her life, thirteen-year-old Maki has heard tales of the legendary city of gold, buried deep in the northern frontier. But when her village is burned and her brother captured by cruel invaders, the legend becomes desperately real.

Armed with a wolf-dog and a heart of courage, Maki sets out on a journey that will demand all her strength and cunning. She is determined to bring her brother home at all costs. Yet as her quest leads her deep into a wilderness of ancient dangers, Maki realizes that even for her, some prices are too high to pay.

Interview with the Author 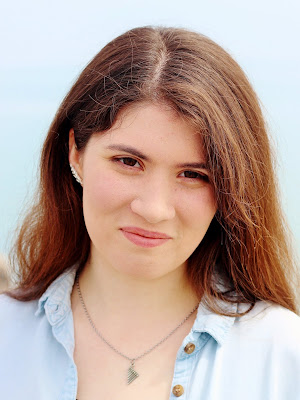 Hearing behind the scenes for books is so fun. What originally sparked the inspiration for this story?

I did a blog post all about this, actually, over on Melody Personette's blog! Short story: the Iditarod, a book about conquistadors titled The King's Fifth, and a song called King and Lionheart. I was thinking about how the north has had its fair share of gold and silver and that it would be cool to have a city of gold legend based in the north. And then the story just kind of went from there.

In talking about Seventh City, you said Maki was a lot like you. What scene with her reminds you most of yourself in her?

There is a scene where Maki is talking to Willow at night, trying to explain her worries and her unshakable fear that she will lose people she loves, and how she is worried that it will happen because she lets down her guard or makes the wrong decision. And he goes on to ask if it had ever occurred to her that the world wasn't made to be carried by her. In that moment, when I wrote it, I felt the same surprise Maki did, as if he was talking to me.

What books/authors would you be geeked to see Seventh City next to in #shelfies?

If you compared Maki and her brother to characters from the MCU, who would they be and why?

Probably Natasha and Clint, actually. Fiery and loyal paired with steady and clever.

Does Maki have a theme song? What inspired it?

If Maki had a theme song it would probably be 500 Miles or King and Lionheart. They are both very tough, loyal sorts of songs.

Either a campfire by a lake or under a pine tree, and while black suits this book well, coffee flavors would have to be blueberry or hazelnut.

Maki has to face a lot of challenges as she starts out her journey. What challenges did you have to face as this story came together?

A lot, actually! I drafted this book when I was working on publishing Crowning Heaven, which was absolutely crazy, and while working six days a week. I spent much of the spring and all of summer and fall trying to complete this book which made for one of the most frustrating first drafts I've ever written. That being said, it was also one of the cleanest manuscripts I've ever written, so there's that. I also lost a friend right before I got the book back from edits so I ended up delaying my content edits so long that I ran up against my next major deadline and my line editor and I had a few horrible, glorious late nights working back and forth. (She is my sister, so it's all cool.) Though I have to say, while this book had more challenges than most, I have had some incredible support from so many, which quite literally, made this book possible.

Any hints about what we can be looking forward to next?

Haha, you had to go there! But I don't mind sharing a little hint: it is a book about Atlantis with a dash of historical fiction, and it's stuffed full of sharks, political intrigue, stormy coastal Maine, and an unlikely power couple.

Author Bio
EMILY HAYSE is a lover of log cabins, strong coffee, and the smell of old books. Her writing is fueled by good characters and a lifelong passion for storytelling. When she is not busy turning words into worlds, she can often be found baking, singing, or caring for one of the many dogs and horses in her life. She lives with her family in Michigan. 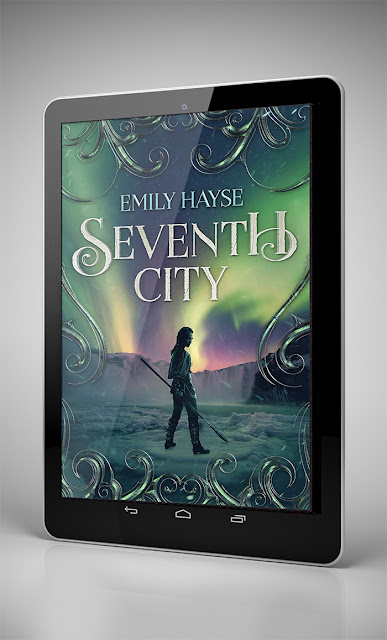